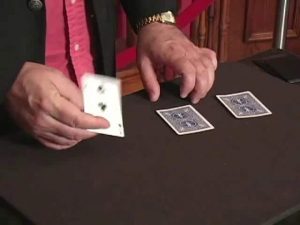 I love the Monte! It is seemingly an honest game of chance but is, in fact, a con game where those who unwittingly are suckered into placing a bet have almost no chance at winning.

The game is fixed; it’s rigged. The operator (the person hosting the game and manipulating the props) is cheating by employing specialized apparatus or utilizing covert sleight of hand methods to create the illusion of a fair game.

For centuries the monte in all its forms whether using 3 thimbles or walnut shells and pea, a ball and cups, bottle caps, or cards – has been used to swindle many poor victims from their hard-earned cash.

The concept is simple, usually 3 objects such as playing cards are used. One of the objects is different from the others – say one red face card like the Ace of Hearts is mixed face down on a table with two black face cards such as the Two of Clubs & Three of Clubs. The task is to follow and find the one odd card, the Ace of Hearts, amidst the two similar cards while their faces remain hidden.

If you do this, you win! But the game is much more difficult than you could imagine because the operator cheats!

With the public’s interest in gambling over the centuries, it is no surprise that many so-called games of chance have found their way into the repertoire of magicians who have learned how to manipulate those games and the paraphernalia involved to achieve a desired outcome – that is… to win or at least prevent you from winning.

Thankfully, most magicians now perform these routines as an expose’ of how others can protect themselves from being cheated by these crooked games.

Three Card Monte was a favorite trick of legendary magician Michael Skinner. For 20 years, he enjoyed demonstrating his incredible variation at the Golden Nugget casino in Las Vegas. The routine he performed made use of some cleverly designed playing cards created by Theodore Deland. These are the same ingenious cards supplied in Theatre Magic’s version of Three Card Monte.

Micheal Skinner fooled thousands of people into believing he was using incredible sleight of hand skill to manipulate the cards, but the cards themselves did most of the work!

Here is Bill Malone performing his hamdling of the Skinner routine

For those who wish to learn some sleight of hand to perform the three card monte, Theatre Magic has you covered!

One of the biggest selling packet card tricks in magic based on this classic gambling plot is Color Monte, marketed by Emerson and West in 1974 with a fantastic surprise ending created by Jim Temple. The inspiration for Jim Temple’s Color Monte was Bill Elliott’s 3 Card Monkey Business which was published in the March 1959 edition of P. Howard Lyon’s Ibidem. Elliott’s routine was based on Ed Marlo’s Quick 3-Way which was published in the December 1958 edition of the same journal.

Although the Color Monte cards are unique, they are not gaffed – in that the effect is achieved through sleight of hand alone. In fact, the Color Monte cards may be examined at the conclusion of the demonstration and the trick, once learned, can indeed be performed with ordinary playing cards. However, I personally feel that performing the effect with regular playing cards diminishes the impact of Jim Temple’s incredible surprise ending.

I shall refrain from naming the specific sleight used in the Color Monte routine, nor will I describe its mechanics, but I will provide a brief history of the technique so that those ambitious few may research it further. The primary sleight of hand maneuver employed in the Color Monte routine has erroneously been attributed to Dai Vernon in the first volume of The Vernon Chronicles in the discussion at the end of the effect,

The Two-Thirteen Trick, page 154. It was believed that Dai Vernon devised this clever maneuver in 1933.

However, the move in question has been more commonly associated with the magicians, Henry Christ and Ted Annemann. The latter having probably first described its application to playing cards in an effect entitled Remote Control which was marketed in 1931. The ACTUAL move first saw the light of day via a gentleman named Burling Hull (of Svengali Deck notoriety) – who used it as an envelope switch in a book entitled ’50 sealed message readings’ – published by Davenports in the late 1920’s.

While both Color Monte and Three Card Monte follow similar plots, they differ significantly in presentation.

Three Card Monte can be presented almost as if you were truly playing the game or, as I prefer, instructing folks as to how the game is played. Color Monte is more of a story-telling routine in which you share an experience you apparently had upon encountering this game yourself while using the cards to illustrate what happened.

I find the Three Card Monte plays very well for adult audiences who can actively follow the cards positions in a scenario where you have some table space to lay the cards down.

Color Monte is great for children and family audiences to enjoy as it features shapes and colors on the cards rather than actual numbers and suite symbols so it tends to be easier to follow, not requiring any significant amount of thought on the part of the audience and the handling can be performed mainly in the magician’s hands so that a table is not necessarily required.

So, the Three Card Monte may be better suited for a seated performance or one in which you can utilize a table whereas Color Monte is ideal for strolling situations. I always carry both with me in my professional work so that I am prepared for any situation at a moment’s notice.