The photo depicts the simple, handling detail of a total impromptu version of this now timeless classic. When performed correctly, at the right time and in the proper context it can baffle and grab interest and attention.

Rising Cards (also known as Card Rise, Aerial Cards, and Obedient Cards) is a classic captivating effect, a visual demonstration that elevates an audience in a state of absolute astonishment, bewilders the mind completely and leaves a lasting impression.

The Rising Cards is basically an effect in which one or more cards (selected or called for) rise up and out of the deck. Some stop at the top of the deck, while others keep on rising and float around the magician, the stage or the room.

Earliest recordings of presentations were mentioned by Thomas Garzonus in La Piazza Universale di tutti le professioni in 1626, although no description of the method. Mr. Garzonus reported that Abraham Colorini made a mentally selected card rise out of the pack.

A method was published in Hocus Pocus Junior: The Anatomie Of Legerdemain by anonymous. A 52 page book first published in 1634. It was the first illustrated magic book in the English language.

Dr Samuel Hooker baffled some of the greatest magicians in the world of his time with invitation-only showings of his Hooker Rising Cards routine in a small theater he constructed at his own home in Brooklyn Heights, New York around 1915.

Samuel Hooker created his rising cards to stimulate magicians to think and come up with their own solutions and explanations and through that process of inquiry to develop new methods and techniques.

As a scientist this is a very natural way of learning. Nature exposes us to all kinds of mysteries, questions and puzzles and scientists try to explain them. They conduct experiments and think logically about them to advance their understanding of nature.

Fundamentally scientists are driven by nature’s secrets and want to understand and explain them. In the same way Hooker is presenting magicians with a mystery and he is asking us to think about ways how it could be done.

Johnny Gaughan presently owns the original Dr. Hooker Rising Cards. The secrets, for there are many involved, are not written down in any published source. Only John and his crew know exactly how it works.

The late Jay Marshall was one of the few who knew the whole thing.

At a Magic Collectors’ Weekend, he saaid that it may not ever performed the routine again. The original setup was actually built into Dr. Hooker’s house. It takes Johnny and his crew almost a whole day to set the thing up. Everything must be perfectly aligned or various parts of it will not work at all.

Lybrary.com released an ebook about Dr. Samuel Cox Hooker and his rising cards, written and researched by Chris Wasshuber. This ebook includes the following sections:

– a detailed explanation with photos of three other famous card rise apparatus: Hofzinser, Neyhart and Joseffy.
– a personal profile of Hooker which goes beyond what has been published so far in the various magic magazines
– my theory of how it is done. I have spent three years researching this effect, discussing it with other notable and not so notable magicians, finding hidden artifacts at collectors who have parts of Hooker’s extensive magic collection.
– personal notes of Gene Matsuura after he saw the 1993 performance by Gaughan. Gene’s notes are the most detailed and most objective description of what happened, revealing several unpublished clues and hints of how it is done.
– a letter by the grandson of Hooker explaining how the apparatus ended up with Gaughan
– fairly exhaustive reproduction of articles and letters relating to Hooker from The Sphinx, Billboard, Pallbearers Review, The Fine Art of Hocus Pocus etc.

This is the most detailed work on Samuel Hooker and his rising cards ever published.

This ebook was written with this very spirit in mind. An attempt to make sense of what has been recorded about Hooker’s rising cards and is the most recorder questionable detail on Samuel Hooker and his rising cards ever published.

Perhaps it stimulates others to also think hard about new ways to achieve such effects. I have communicated with other magicians, some of them notable and recognized, who have developed their own theories about how Hooker did it.

The written details lead to exciting and stimulating exchanges of ideas and critiques – exactly the kind of effect Hooker wanted to achieve with his “Impossibilities”.

For more details please check the website and the free newsletter at http://www.lybrary.com/

Howard Thruston’s Rising Card act in which the chosen card would rise out of the deck and float through the air.

It became a staple in every magicians repertoire and custom decks of cards were designed with automatic mechanisms built within the deck making it seem impromptu as cards were selected and made to rise with no real restrictions on where the effect could be demonstrated.

David Blaine used a popular version of the self contained deck in his first television magic special “Street Magic” and the recorded response from the participated spectator is authentic, the consistent response to the effect and an example of the reactions that are being received whenever the effect is performed.

The effect of the rising cards will continue be an effect in magicians repertoires for many years to come because just the idea of have a card named and it slowly rises out of the deck and into the magicians hand engages the imagination of everyone.

Check out our version of the rising card in our Levitator course. This is a complete course of truly amazing close up levitation effects. The best work on these diabolical, ingenious methods of object flotation.

The Levitator can be purchased at our online store TheatreMagic.com.
Also available, The Rising Deck the self contained version with the built in automatic mechanism that cause the selected card to rise from the deck. 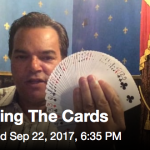 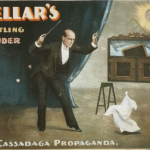